a day of hopeful conversations, innovative speakers, and meaningful discussions. Total was the final day of the United Methodist Campus Ministry conference…

Day 3 (12.16) of Refresh 2010 has come to a close–a day of hopeful conversations, innovative speakers, and meaningful discussions. Toda was the final day of the United Methodist Campus Ministry conference which is sponsored by the Foundation For Evangelism. Laura Story & band members opened our 10am session with music and time for prayer and reflection.

The keynote speaker for the morning was Rev. Adam Hamilton, lead pastor of Church of the Resurrection & author of

numerous books including When Christians Get it Wrong, Seeing Gray, and others. Hamilton spoke from his experience with young adults & college students at Church of the Resurrection. He spoke of the increasing secularization of society and the aggressive atheism (anti-theism) present in the current American culture. He applauded campus ministers for their ministry and noted that campus ministers are on the “front lines” of understanding and working with the new generations. Hamilton remarked that Christians must “understand the questions and concerns of the people you work with and help answer some of the questions” and that we must “formulate thoughtful Christian responses” to their difficult questions.

Hamilton shared portions of his own narrative interwoven with many of the questions that young people and college students are asking–questions of Theodicy (evil in the world), questions about other world religions, and questions about sexuality. Hamilton told the tragic story of the accidental death of his two best friends while he was in college and about how that caused him to reevaluate his call to be a pastor and whether or not he could represent a loving God after their untimely deaths. Ultimately, he emerged from that 6 month time of study with the understanding that God gives humans choice and that the world has laws which are seldom suspended by God. He decided that God wrings out the good–that is forces out the good from the suffering.

In looking at other world religions Hamilton spoke of a “third way” which lies between exclusivism and universalism. This “conjunctive faith” (James Fowler’s term) is a “radical center” of inclusivism. This position articulates 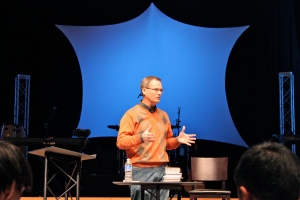 that Jesus is the means of salvation, but that God can give salvation to anyone God chooses. The conversation around sexuality centered specifically on homosexuality. Recognizing that this is a divisive issue in ours and other denominations, Hamilton said that 2 factors have changed his view point: 1) the complexity of the Bible (its “messiness”) and 2) spending time with the parents of gay teens or students who committed or attempted suicide. Throughout his talk, but especially in the context of this difficult issue, Rev. Hamilton modeled responsible dialogue, civil discourse (esp. in the resulting Q&A), and a vulnerable, disarming openness that helped to produce mutual understanding and a furthering of love for each other. Hamilton articulated a hopeful-critical vision for the future of the United Methodist Church that calls for young people to be “modern day reformers” helping to retool and rethink Church in ways that help the wider world to see the Christian faith as an examined, intelligible, and practical way of living.

and others. For dinner, sponsored by GBHEM, we ate BBQ from Jacks Stacks (#1 or 2 BBQ place in Kansas City) and continued to share in conversation and reflection upon the workshops, the speakers, and Refresh itself.

The evening’s keynote speaker was Pete Greig, UK leader of 24-7 Prayer & author of Red Moon Rising and God on Mute–two books about his experience as a church planter and prayer 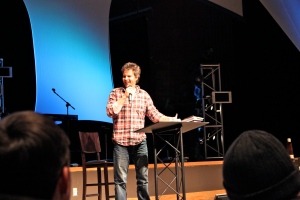 movement leader. Greig shared a time of teaching and practical prayer with our gathering centering around the Great Commission in Matthew 28. He focused on how “we’re all wired differently, but all are used equally in God’s purposes.” Greig shared his own personal story of prayer & his thirst for God’s presence and how that fueled the 24-7 prayer movement, which began in 1999. He shared the history of prayer movements with groups like the Moravians at Herrnhutt and John Wesley’s encounters with them–especially in the context of prayer. Pete argued that  “people aren’t looking for another program or a product…they are looking for the presence of God.”  And said that we as pastors must also long for that living water that God provides and that prayer is on of those primary ways by which we can experience God’s mercy and grace.

Refresh concluded, appropriately, in our saying together Wesley’s Covenant Prayer:

I am no longer my own, but thine.
Put me to what thou wilt, rank me with whom thou wilt.
Put me to doing, put me to suffering.
Let me be employed for thee or laid aside for thee, exalted for thee or brought low for thee.
Let me be full, let me be empty.
Let me have all things, let me have nothing.
I freely and heartily yield all things to thy pleasure and disposal.
And now, O glorious and blessed God, Father, Son and Holy Spirit, thou art mine, and I am thine.
So be it.
And the covenant which I have made on earth, let it be ratified in heaven.
Amen.
more photos here